"Your all spare parts and when the PPC gets in you retards won’t have jobs and that would be of great benifit to the real Canadians." - Steve

Sometimes, you just have to answer a reader comment.

I have a Question For Justin Trudeau About the Blood Ban

The federal ban barring monogamous gay men and transgender women from giving desperately-needed blood when others engaged in the same activities freely donate blood is a galling example of what could have been, but for Justin Trudeau and Hedy Fry's lacking the will to do the right thing. 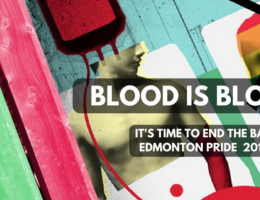 Well done: Vancouver Pride took a stand UBC and Vancouver Library leaders should have months ago.

The inaction of elected officials such as Liberals Hedy Fry and Sam Sullivan is responsible for the pain Yaletown or Olympic Village parents will feel every day taking their kids to Coal Harbour accross the downtown core.

Course: governance 101. Grade: F. UBC has much to learn about following its own rules.

In recent months UBC asked to feature me as a success story for their engineering program. I am troubled by their conduct regarding anti-trandgender hatred on campus and I can not let UBC use my name as long as it cultivates hatred against marginalized communities or helps others do so.

Read more Course: governance 101. Grade: F. UBC has much to learn about following its own rules.

On June 12 2016, Orlando's Pulse Nightclub was the scene of a massacre targeting the LGBTQ community. We must stand together to fight off the cultivation of hateful impuses before they become murderous action.

Research shows less than 5% who medically transition detransition, not 80%

A 2006 study on transgender people showed that less than 1% of transgender people regret their decision and detransition. Another, more recent longitudinal study spanning 50 years from the 1960s to its recent publishing date found a 2.2% de-transition rate. ..so why the consistent messaging in politics and social media that over 80% of kids…

Canada’s indigenous women and girls are “under siege,” and their deaths and disappearances amount to “a race-based genocide.": June 2019 MMIWG report