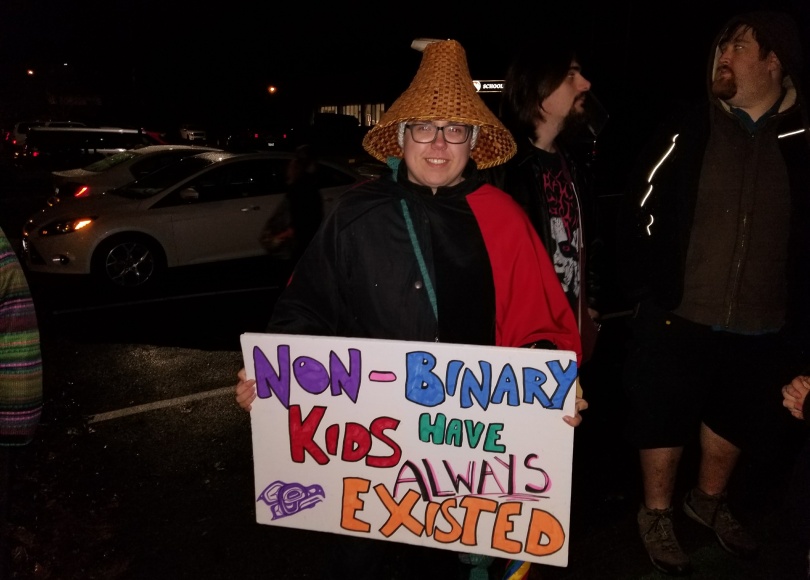 While BC was focusing on our October 20 local elections, the news broke in the US that the Trump administration is seeking to define transgender people out of existence by defining sex as binary and immutable. This is not a good thing. In fact, it is deeply troubling.

A recent New York Times article describes the contents of a memo from the Department of Health and Human Services, HHS, as saying that key government agencies needed to adopt an explicit and uniform definition of gender as determined

“on a biological basis that is clear, grounded in science, objective and administrable.”

According to the New York Times, the memo proposes to erase the possibility that people are transgender and instead:

“define sex as either male or female, unchangeable, and determined by the genitals that a person is born with..

….The sex listed on a person’s birth certificate, as originally issued, shall constitute definitive proof of a person’s sex unless rebutted by reliable genetic evidence.”

The HHS memo further proposes that any question about a child’s sex be clarified using genetic testing. Catherine E. Lhamon, who led the Education Department’s Office for Civil Rights in the Obama administration and helped write transgender guidance that is being undone, expresses it best in telling the NYT that:

“This takes a position that what the medical community understands about their patients — what people understand about themselves — is irrelevant because the government disagrees,”

Instead of moving towards a policy that reflects the advice of current science about the cause of sexual dimorphism and identity, this dangerously regressive approach panders to discredited ideas while adding nothing of value to a conversation beyond a degree of certainty about US policy about sexual orientation and gender identity.

At various times in the past, vital statistics bodies certified faith, class, and race. Most countries stopped doing so when our lawmakers realized how much the harm of this practice outweighs the benefit. Some like Malaysia continue to do so. A Malaysian birth certificate tracks faith, race, sex,

Certifying sex is something I feel should not happen in the first place, as it causes discrimination and brings nothing back. This is the basis of a 2015 BC Human Rights Tribunal complaint in which I joined 9 other complainants asking the BC Government to stop certifying the sex of people.

Birth certificates are of little use in medicine due in part to its error rate caused by up to the 2.5% who are intersex or transgender. Because the sexual characteristics of people are developped on the basis of a combination of genetics and environmental factors,  genetics alone are not useful in determining a person’s sex.

Because gender roles can no longer be mapped to somebody’s occupation, gender expression, behaviour, or place in society, binary sex certification offers no tool to verify a person’s identity or social role in 2018. Because there are transsexual and intersex persons in our midst whose experience needs to be allowed for, a rigid interpretation of sex as immutable and binary despite the evidence at hand serves only one purpose: giving a specific and usable tool for the purpose of discriminating against anyone whose identity does not match the sex they were assigned at birth.

Certifying sex is wrong and harmful for the same reason that certifying race, faith, or sexual orientation is. This practice serves no demonstrable purpose due to errors and changes over time, is taken to mean something other than it really does, and needlessly opens the door for abuse and oppression. Certifying it as immutable will feed the discrimination that transgender and non-binary persons face in that country, further increasing the barriers to living their lives to its fullest.

It is deplorable to witness the US continue to persecute transgender and non-binary persons under its current administration. Lucliky, countries like Canada recognize transgender and non-binary persons as their authentic selves, and we are a country that does not balk at taking in refugees who face state discrimination of the very type the US is considering. It should take the opposite path. The US should recognize that because people know who they are, there is no need to dictate it to them. Leaving people alone and respecting their identity is the best way to respect your citizens. After all, we only police what people do rather than what they believe or who they are. There is nothing to be won from ignoring what people tell us about who they are