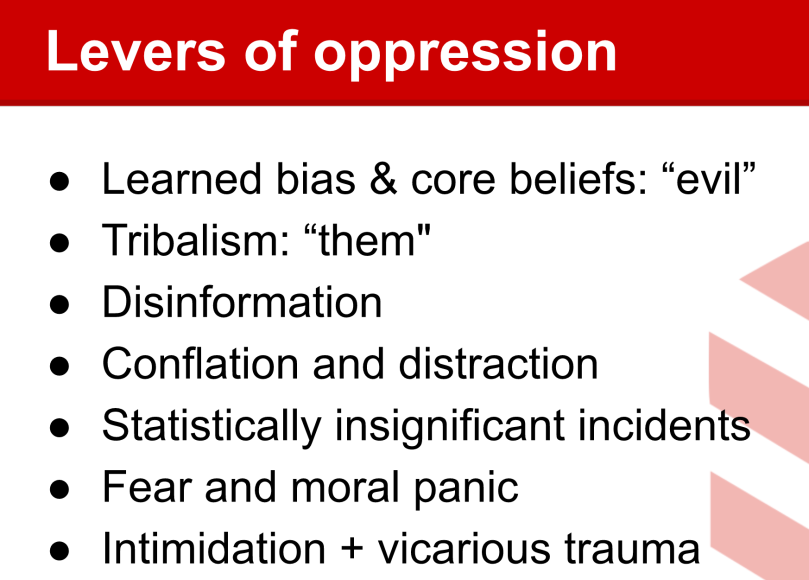 I received a letter this week through my Morgane Oger Foundation email account that illustrates why disinformation needs to be controlled online. The angry correspondent, offended by the activities ascribed to the Morgane Oger Foundation, felt compelled to tell off the organization and express comfort that many things that he feels are wrong about Canada today will be resolved .

” [You’re] all spare parts and when the PPC gets in you retards won’t have jobs”. – Steve

The email highlights in my eyes the harmful impact that disinformation campaigns cause by twisting perception of people to the point that the beliefs of some become utterly disconected from the facts on the ground.

At a time when we have two extreme-right populist parties campaigning in the ongoing Canadian federal election, it’s once again time to talk about dangers of the consequences of lying for the purpose of causing fear and hatred.

This particular letter was from somebody who’s not a fan of the Morgane Oger Foundation and, as the letter shows below, they believe strongly that Canada is intended for a very specific cultural community that they presumably think they belong to. Reading the letters, I am mindful that for every letter of this type that’s sent, 100 letters were nearly sent. Angry letters are important and indicative of mindsets. They need to be considered.

With apologies to everyone its content targets, which seems to be pretty much everyone in Canada, I am reprinting the body of the email here for the record because I believe it is important that everyone sees what some people are latching onto when people say things that target people because of who they are.

The body of this specific letter is a stream of misinformed hatred targeting Muslims, Indigenous persons, immigrants, and non-White persons. Promising a civil war if the so-called “white genocide” does not end, it calls the organization traitors, cryptically saying “your all spare parts”:

I would like to request that u guys address your lies and propaganda on your site, address the elephant in the room, where u state hate crimes are up and have no content as to why, visible minorities are the ones committing these crimes against white people, Jewish mainly as Muslims hate Jews the most, then white christians, to me your site is just another globalist hateful site the advocates white genocide.. u liberal retards just don’t fucking get it do ya! Your all spare parts and when the ppc gets in you retards won’t have jobs and that would be of great benifit to the real Canadians.. fuck the natives and immigrants that are simply here to destroy Canada and our way of life which is clearly happening, ppl like u ensure Canada will have civil wars that or kids will have to fight.. use your fucking brain u traitors.. and your company is absolute trash, very pathetic and openly racist towards whites as your mission seems to be all about taking power away and giving it to poc simply because they aren’t white, if they were worthy of any power there home countries wouldn’t be shit holes.. give your heads a shake u retards..

Sent from a real Canadian..

I do not know who influenced the ideas behind this email, but I am mindful that the letter echoes supremacist disinformation I have witnessed people saying in front of me at events I have been to that targeted my own community. I am also mindful that Statistics Canada has reported a steady rise of hate-motivated violence since section 13 of the Canadian Human Rights Act was rescinded in 2013.

I have seen it often, and I expect to see it again.

I have read racist, nationalist, fundamentalist, and transphobic supremacist material presented as if it were the truth or common sense. I have seen major institutions recklessly enable the presentation of this material regardless of the intent of the presentation.

The vitriol within this particular email speaks for itself and gives a small glimpse of the supremacist propaganda that people absorb and come to believe when their information sources are limited.

This letter’s author expresses beliefs that would be easily disproven. is precisely why we need to control online hatred. We need to have ways to keep people accountable for the disinformation that they employ to instigate hatred because hatred is like a match set on fire. In the wrong place or with too many matches a house can be set alight.

Spreading lies to cause fear and loathing of others is far from free expression and it’s time we recognize this. This is why Canada has libel and defamation provisions in its tort law. What we are missing, however, is accessible recourse to address attacks on people on the basis of human rights law. This recourse is address through the human rights act, under the civil code, and there is a glaring gap in Canada’s inability to enforce the law online, a federal jurisdiction.

Whereas Canada needs to protect people telling the truth and needs to vigorously protect creativity and the exploration of the truth, disinformation needs to bring serious consequences regardless of the medium. To my eyes, Canada’s failure to manage hatred and disinformation on social media is why this email was written.

In September 2019, I was invited by Adler University to deliver their inaugural Common Hour lecture, “Emerging Freedoms: Lessons learned from the frontlines of Canada’s Transgender Rights Campaign”, describing the transgender community’s recent wins on the road to the explicit protection of gender identity or expression. In it, I spent some time talking about why it’s so important to address hate propaganda’s pathologization, demonization, and vilification of people because of who they are.

Whereas Canadians have every right to hold any view they hold, freedom of expression, freedom of belief, and freedom to live our lives free of discrimination are equal under the law. This was part of the ruling in the Oger v Whatcott BC Human Rights Tribunal case. Based on my complaint about Bill Whatcott’s discriminatory publication about me, the tribunal ruled that belief was not superior to any of the other explicitly-prohibited grounds of discrimination in Canada.

Canadians also have every right to live in peace, protected from anyone else who might wish to actively turn other Canadians against them through disinformation or hate-propaganda campaigns because of who they are.

The audio recording of my lecture is available below from SoundCloud. The slides for the talk can also be accessed here.

In conclusion, hate propaganda has real and lasting impact on people who are exposed to it. It makes Canadians fell less safe than they should be able to feel, it ferments resentment in communities, and it encourages acts of violence by suggesting false conclusions. The wild-west situation on social media facilitates the distribution and amplification of hateful content and disinformation.

Canadians need mechanisms to be available that enable us to address hatred online before it turns into hate-motivated acts of violence, because waiting for violence does nothing to prevent it.